NEW MINAS, NS — A New Minas resident who works through the Flower Cart Group’s supported employment services program has proven to be a model and award-winning employee.

Aaron Bardell said he found out about a month ago that he would be the recipient of The Flower Cart’s 2022 Biggs Award. He said the news made him “bubbly” and “ecstatic”.

Bardell said winning the award meant a lot to him. It demonstrates that hard work can take a person a long way.

“It’s an exciting feeling, and it’s nice to be recognized for the hard work you put into your job,” Bardell said.

Based in New Minas, The Flower Cart Group promotes community participation for adults facing barriers through supported training and employment. 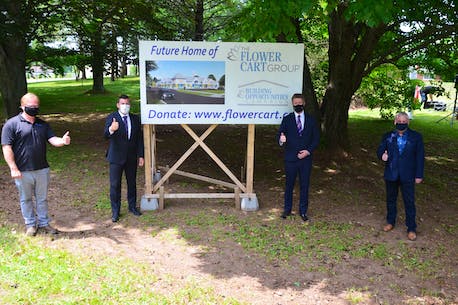 The Biggs Award is presented annually, recognizing an individual who exemplifies the job skills taught and supported by supported employment services. It highlights a worker who has a cognitive impairment who has become a great role model for others.

What’s cooking? Shelley Hopkins, head of the commercial kitchen department and coordinator of employment support services, said Bardell has mastered the art of wrapping granola bars better than any other member of the team, developing his own system. Hopkins said his system makes him faster than anyone at work and that’s something she and others haven’t been able to replicate.

He’s not “the shy guy” anymore.

Bardell said he finds the commercial kitchen a relaxing work environment and likes being able to go at his own pace. He started working two mornings a week, but now works four or five hours and will stay on in the afternoons if necessary.

“I like the routine, it’s pretty easy to get into and it can be flexible too,” Bardell said.

He said he got along well with his colleagues, whom he considered “a great group”. Bardell said he made many friends and was honored to be able to work with them. He said this sense of camaraderie made him comfortable working with other people.

Bardell said the experience helped him learn to be a better communicator. Although he likes the routine involved, he has also learned to “expect the unexpected because sometimes you never know what you’re going to get into”.

He learned how to weigh ingredients, ship and receive them, and developed a strong focus on quality control, both of products and packaging.

Bardell, who grew up in Coldbrook, said July 11 he was excited to be heading to Antigonish the following weekend for the Special Olympics Nova Scotia Summer Games as team captain. Kings County soccer.

Bardell was captain of the provincial soccer team at the Special Olympics Canada Summer Games a few years ago.

He also enjoys playing video games and recently took up CrossFit. Bardell said CrossFit takes several fitness disciplines and combines them into one. He said with a laugh that “it really hurts a lot” but “it really helps” to get him into better physical shape.

Hopkins has been Bardell’s supervisor since he started at the Flower Cart Group, and she has known him since he was five years old.

“That’s why we supported employment, (it’s) to help people get the skills they need, but it’s not just about specific skills. It’s also trust because that’s one of the things that a lot of our customer base lacks,” Hopkins said.

She said Bardell also learned how to problem solve, stay focused on tasks and manage time.

When The Flower Cart Group moves into its new facility, the aim will be to enable Bardell to focus more on developing skills associated with warehousing, shipping and receiving.

“Aaron will continue to learn some more of those skills with a focus on getting him out into another community job,” Hopkins said.

She said Bardell’s huge progress had a lot to do with him winning the Biggs Prize. He takes on tasks when asked — and even when not asked — and is an excellent team player.

“He works with his colleagues in a caring and respectful way. When we have new people coming in, he’s a great role model of how to work,” Hopkins said.

She said he went from being a shy, shaky and nervous guy to coming in every morning and getting ready for the day at work without having to be told what to do.

Flower Cart Group executive director Jeff Kelly said he was “so happy” for Bardell. He said he couldn’t think of a more worthy nominee, considering everything the Biggs Prize encompasses.

He said the mutually beneficial relationship continues to be very positive. Bardell has grown “by leaps and bounds” during his time with the organization. Kelly said those involved with The Flower Cart Group couldn’t be prouder of Bardell, or happier to have been able to deliver this well-deserved honor.

Kelly recalls that when Bardell first arrived he was barely able to make eye contact because he was so reserved and lacking in self-confidence. Kelly has watched a 180 degree turn and now sees a young man “overflowing with confidence”.

Kelly said that’s what supportive employment support can provide: “the opportunity to excel, grow and shine at your own pace.”

The Flower Cart Group may soon begin work on a new center for social enterprise and vocational training.

The goal of the Building Opportunities fundraising campaign is to construct a new facility on property adjacent to the Louis Millett Community Complex in New Minas at 9503 Commercial St.

With the new facility, The Flower Cart Group would be able to move all of its programs under one roof. Executive director Jeff Kelly said they were doing well with the campaign, all things considered.

“We’ve had challenges as a result of the pandemic that we’re continuing to work on, and those are mostly on the cost side,” Kelly said.

COVID-19 delayed them a year from when they planned to start construction. The original campaign goal of $5.8 million was met and exceeded, but cost estimates in some areas have since been affected by inflation.

It means there’s more fundraising to be done, but Kelly said it’s not a disaster. Nothing prevents them from starting the project and they are now aiming for the end of July or the beginning of August for the groundbreaking.

The Flower Cart Group hosted a fundraiser for a hot dog barbecue on June 30 in support of enhanced day program activities, raising $1,392. Kelly said for the most part, the fun event was thought out, planned, organized and executed by program participants with support from staff.

For more information about The Flower Cart Group or to donate, visit www.flowercart.ca.

The smart shopping cart market is expected to witness a huge

From road cart to burger brand